In 1992 Roger and Sue Devenport purchased a thousand acres of land in Northern Wisconsin and developed one of the finest white tail hunting preserves in North America. www.threelakespreserve.com

In the past 15-years they donated lodging, meals and hunts for numerous disabled, disadvantaged and terminally ill children and youth. Their successful Three Lakes Preserve was sold in 2007, and they now devote their time to providing adventure experiences for needy boys and girls from around the country.

As a youth Roger experienced firsthand several years of living away from his parents in a youth home. Both he and Sue have a compassion to encourage others facing difficult life challenges. They are pictured with their children, Sean, Abe, and Sydney. 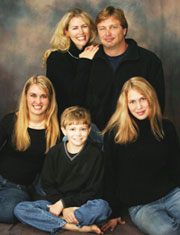 In 1986 Camron Tribolet was shot three times as his car was attempted to be hijacked. He was rushed to the hospital and not expected to live. Both legs had to be amputated above the knees, and it was 8-months before he was able to leave the hospital.

But his disability has not slowed him down. If anything it has produced a positive attitude of achievement. He started by marrying his physical therapist, and they have two children. He has a successful professional career and has volunteered his time to host over 100 students on disability hunts, many in cooperation with the Devenports. In addition to hunting Cameron is an expert down hill skier.

Cameron and his wife Sue are pictured with their children, Braden, Julia and dogs, Abby and Moose. 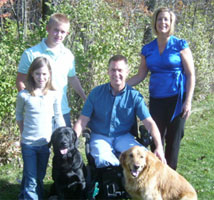 John and Jan Gillespie founded the Rawhide Boys Ranch in 1965, and were joined a year later by Bart and Cherry Starr of Green Bay Packer fame. The boys ranch has become one of the most successful in the nation. Several thousand teenage boys have been placed there by the Wisconsin Juvenile Courts. www.rawhide.org.

John and Jan have a compassion for encouraging youth in need, and assist The Way Outfitters in raising necessary funds. In the 35-years they directed Rawhide, they were able to raise over 100-million dollars in donations. 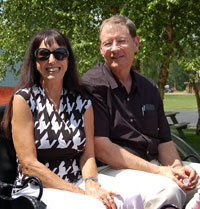