Eric Thomas was an avid outdoorsman whose life revolved around fishing and hunting. He was born and raised in Albuquerque, NM and lived everyday to the fullest. He hunted and fished for every species that he could. After his passing on July 31, 2014, we all knew he needed to be remembered in a big way. He believed that every person should have the chance to put their dream animal up on their wall. He had such a big heart and nothing would make him happier than being able to help children and veterans who may never get this chance, fulfill a dream. Please make a donation of any amount to The Way Outfitters in his honor to make sure these children and veterans can get their chance. 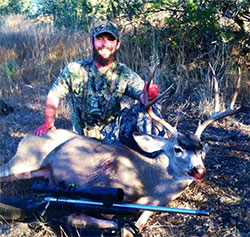 On Friday night, June 7, 2013, Fred C. Harteis was called home to be with Jesus. He was a loving husband, doting father and grandfather to 10 beautiful grandchildren. Our thanks to everyone that have replied with your thoughts, prayers and best wishes. Fred was a man who spent his life recognizing and celebrating the dreams of others, and we know his life wouldn’t have been what it is without your impact as well.

Memorial Gifts
It has been my privilege to work with The Way Outfitters Charity in bringing joy to disabled veterans and youth on three day hunts and fishing trips. The family have decided it would be honoring to our father for memorial gifts from his friends to go to this wonderful tax exempt charity. Your gift can be presented through Pay-Pal on this website, or you can mail your gift to…

The founders, Roger and Sue Devenport and myself will see that all gifts support outings for the disabled. Thank you sincerely in the name of my father. 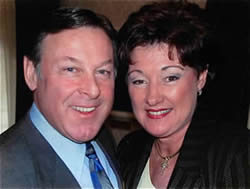 Rob Baker, originally of White Lake, now lives in Three Lakes, WI with his wife, Heather, where the couple own and operate Baker’s Grocery. In honor of his son, Josh Baker, he has helped fund a fishing trip to Key West, FL for a disabled Iraqi War Vet. —– At the time of the accident, Josh had just returned from a seven-month tour of duty in Iraq with the U.S. Marines. He was living at Camp Pendleton in California. He had been given his own 13-man squad, and was preparing to return to Iraq for a second tour. “He saw some heavy combat in Iraq as part of the Marine offensive in Fallujah,” Rob says. “Weeks went by when we didn’t hear from him. But then, one night on CNN’s 11 o’clock news, I saw him-saw his eyes and forehead-just above the tank gun. I yelled out to Heather, ‘there he is!’ I managed to get the image taped and blown up, and it clearly showed his nametag.” Rob adds, “Josh loved more than anything to fish and hunt. That was his life’s passion. He told us his hunting skills had made him a good soldier in Iraq. He said, ‘Dad, what I learned from hunting with you has helped me survive here.” The car accident happened while Josh and some friends were on their way to visit one of the friends’ home. The California expressway was slippery from the rain. The car spun out of control and slammed into a stalled vehicle. The fearless Marine, who had survived hell in Fallujah, was severely injured. When Rob got to the hospital, he saw that Josh was mostly unconscious, suffering from a broken back,pelvis and a deeply fractured skull. But he was far from alone. More than 30 Marines were gathered around, squeezed into the room and corridor. “They kept watch over him all night,” Rob says. “They never left his side.” 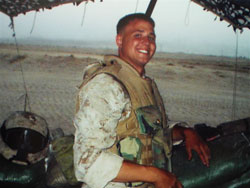 25 years ago he was diagnosed with cancer and successfully fought that cancer, then about 12 years ago was diagnosed with leukemia. On 11/16/08 my Dad finally won his battle with cancer because now he is in Heaven and I promise is not at any Doctor Appt, getting shots, poked or prodded or getting dialysis….he is in a much better place and pain free. I have to tell you about how God works. You see on 10/9/08 Alan his Dad and my Dad and I went to The Wilderness to get pictures of the rams for our upcoming TWO hunt and to scout the place. Alan snapped a picture that day and it’s now framed and in my office. I will never forget that day that I got to spend with my Dad. It was only 5 weeks later that he would pass onto Eternity. This picture will bring back great memories and my son, Trent reminded me shortly after “Pap” had gone to be with the Lord that we visited him that week and the last thing he we said to him was We Love You and the last words that Pap/Dad said to us was that He Loved Us Too! What more could we ask as a lasting impression of our final words together. God writes terrific endings……………May God Bless You Always.

Have a safe and terrific hunt with Grandfather and Grandson and I bet my Dad will be watching from above! He’ll have just as big a smile on his face as all will who are involved in this wonderful ministry and hunting experience!!!! 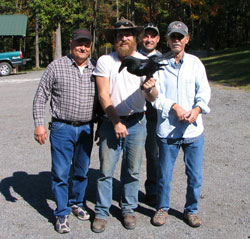 Ralph Barten became blind as a result of a lower back surgery gone wrong. While recovering he saw a TV program about kids living with cancer. “They became my heroes” Ralph says. Ralph attends a number of functions for sportsmen with disabilities. (mainly kids) making “stuff” for them, and it has grown into an activity that he enjoys doing for various charities for youth with disabilities and illnesses. Ralph makes among other things Diamond Willow walking sticks, Antler tip zipper pulls, and antler jewelry. Ralph is always in need of antlers for his jewelry, and if you know of someone that could donate some antlers please contact The Way Outfitters. 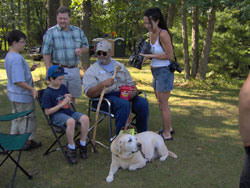